On Wednesday afternoon of this week we had a great opportunity to see the fantastic community spirit of Selby High School in action, as 250 students from our local primary schools came to see our whole school production of “Annie”. It was a proud moment for me, to be able to invite so many young people in our community to see a demonstration of all that is the very best about Selby High School. The students involved, from the actors, singers and dancers to the musicians and the stage crew, were such fabulous role models for the youngsters in the audience.

This event was followed by brilliant performances of “Annie” for two lucky audiences on Wednesday and Thursday evening. Director Sally Lewis and her team produced an exceptional show, which was full of pace and energy and rich in comedy, but also took the time to consider some of the serious issues which were important in 1930s America, when the show is set, and are still very relevant today. The New York streets and houses were brought to life by the lively dance routines, the imaginative set and the vivid back-drops. From a superb ensemble performance, it is difficult to pick out highlights, but a special mention needs to go to lead role Kate Ripley, who performed through the pain of an ankle injury, and to Chloe Drake whose memorable performance of “Little Girls” capped a great comic role. Thanks so much to all the staff and students who gave up so much of their time to bring a little bit of West End magic to Selby.

In recent weeks students have been showing their commitment to helping others, with lots of different initiatives taking place. A group of Year 11s had the brilliant idea of selling individual rolos which were delivered today (Valentine’s Day!) to raise money for the charity YoungMinds. In another entrepreneurial event, the student leaders of each house have been given £35 start-up money, and have been tasked with raising as much money for St Leonard’s Hospice as they can. Finally, teams of our Student Wellbeing Ambassadors started visits to local primary schools this week, to support the young people with their transition to secondary school. These visits will continue to take place after half term, giving lots of our ambassadors a chance to contribute to this important work.

We’ve had lots of other things going on since our return from the Christmas holidays. Author Hilary Robinson enthralled our year 7 and 8 students, delivering two exceptional presentations about her new book 'A Song For Will: The Lost Gardeners of Heligan'. Hilary took the students back in time to appreciate the hardships and loss of life that WW1 brought to the country. Hilary's new book consists of a series of emotional and informative letters that span from 1914-1918. The letters reveal the stories of the gardeners of Heligan during WW1. Hilary researched these men in detail and found a connection between Selby and one of the gardeners of Heligan, John Varey, who married a Selby woman and settled in Scarborough. Hilary also brought a special surprise with her to Selby High School. John Varey's great niece, Helen Varey, kindly came along with Hilary and spoke about John and passed around photos of him in his regiment uniform.

In another fantastic addition to our history curriculum, for the second year running, year 9 students were involved in a live webcast with a holocaust survivor. Susan Pollack MBE survived both Auschwitz and Belsen camps and shared her moving testimony with schools and other centres across the country to mark holocaust memorial day.

We were also hoping to welcome popular sports author Matt Oldfield this week, but unfortunately Storm Ciara had other ideas. Instead, he will come to us at some point later on in the school year. The year 10 RE group were treated to an exploration of religion, philosophy and culture when Bishop John of Selby came in to do a question and answer session with them. Finally, our second annual Flood-A-School event was a great success; several university student ambassadors came into school to visit different lessons and inform our students about some of the different pathways and courses that can be studied at university.

Numerous trips and visits to local colleges and other educational establishments have enhanced the careers curriculum this half term including visits for year 10 and 11 students to Selby College, York College, Bishop Burton College and Askham Bryan College. It was a real privilege to be invited to attend the Award Ceremony for a group of our year 10 students who had been involved in a project with an organisation called Groundworks, as part of our work with the National Collaborative Outreach Programme (NCOP). The boys had spent one day a week for six weeks doing a Level 1 Horticulture course, learning a variety of new skills and helping to make improvements to the local community. A new cohort start the same project after half term, so we wish them the best of luck with this.

The sporting calendar has been as busy as ever. Year 11 girls took part in the YCK Foundation Festival of rugby. The girls in the team have dedicated five years of commitment to their school rugby, and have not only played rugby union to a very high standard, but have also tried their hand at rugby league. With the success of the year 11 girls in mind, it was great to see lots of year 7 and 8 girls take part in a morning of Rugby Union activity at Selby RUFC, as part of the All Schools Programme. The event was supported by special guests Bill Sweeney, Sports Minister, Nigel Adams former rugby star, Bill Beaumont and you can read more about it here: https://englandrugby.com/news/article/sports-minister-at-selby-rugby-club…

Other sports teams that have won their matches recently, include the year 9 boys football team who won their quarter final match against Sherburn, and the U13 girls who won their quarter final 7-0! Our year 7 indoor athletics team also had a very successful evening recently. The girls finished second and the boys won the event, going through to the North Yorkshire Finals. Big congratulations also go to some individuals: Neve Burden was picked for the U17 North Yorkshire Hockey team this year; Izzy Khosla was selected for North Yorkshire and Gemma Gibson represented West Yorkshire in hockey.

We have two exciting trips coming up over the next couple of weeks. Selby High Ski Trip to Aosta, Italy is all set to go on the 29th of Feb. 30 very excited pupils are kitted out and fully prepared from their Xscape lessons. Meanwhile, 53 year 9 students are preparing to visit the Belgian battlefields during the half term holidays.

Finally, Pam Thomas, our school receptionist, will be leaving the school on the 28th February, after over 20 years of service to the school. Many of you will have experienced Pam’s professionalism, kindness and helpfulness, and will appreciate the fantastic contribution that she has made to the school community. On behalf of the school, I would like to wish Pam all the very best in the future.

Wishing you all a happy and healthy half term. 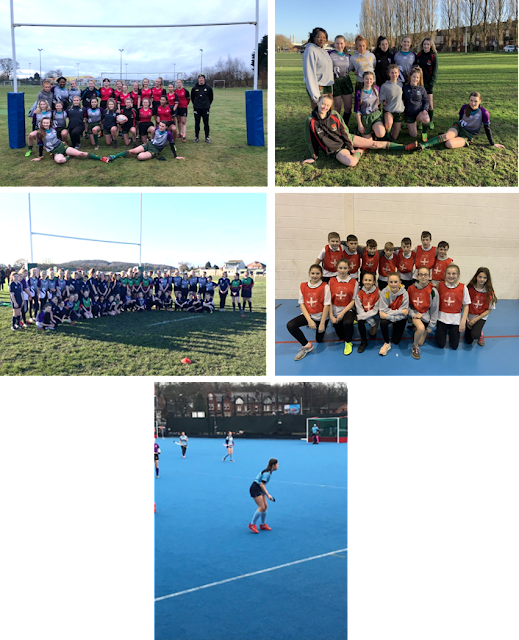